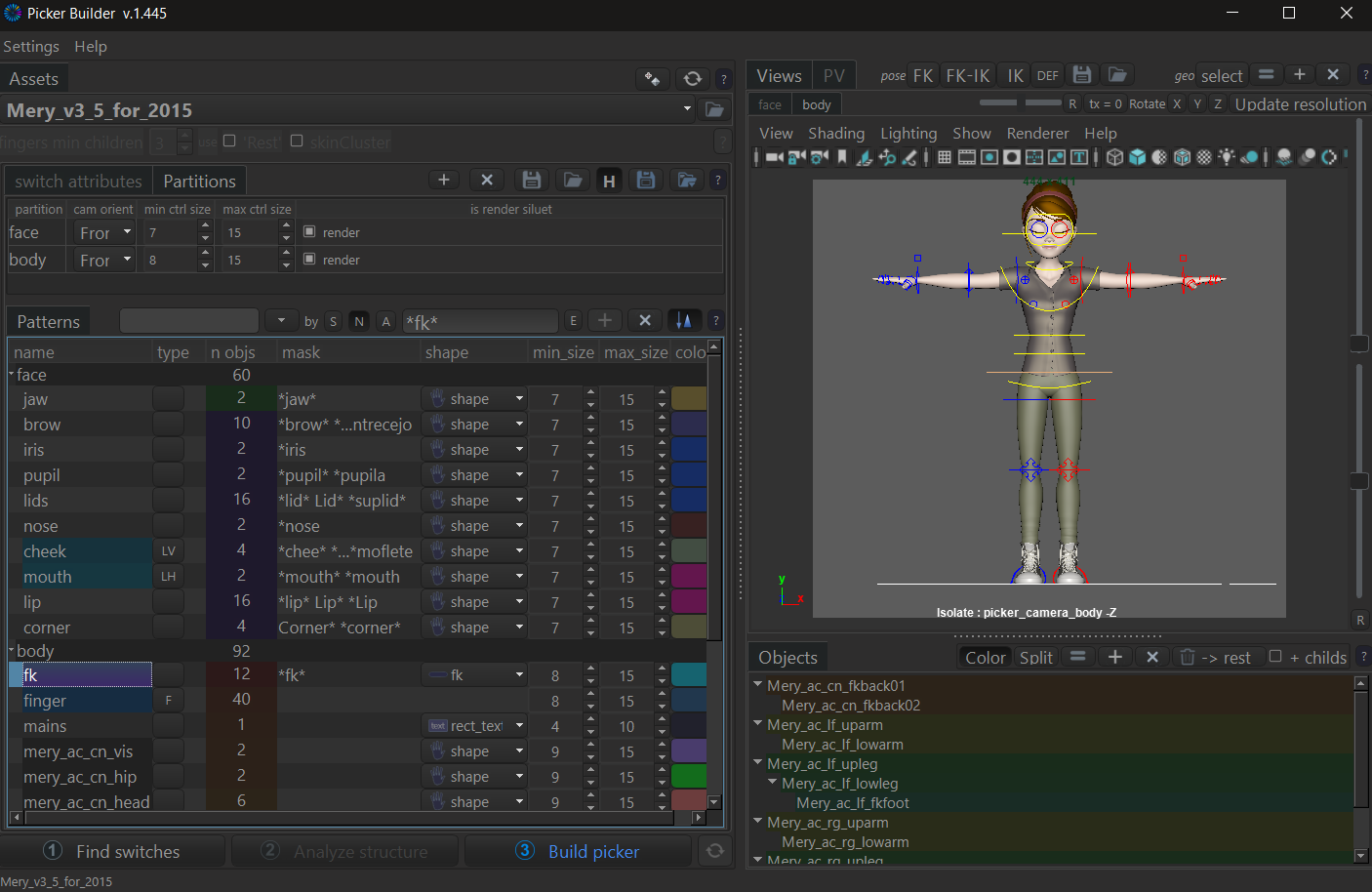 In a brief way, how the PB works:

PB recognizes only visible controls, so first PB looks for attributes that will switch their visibility (fkik, blend visibility, etc.).

You can specify these attributes manually.

Then PB analyzes the hierarchy of all the controls and groups them into patterns (eyes, mouth) that are grouped into partitions (face, body).

Each partition has its own camera.

The patterns are defined by an initial list, which is defined in the file init_template.json . You can create your own templates of patterns.

Some patterns are defined algorithmically (main, fingers), but you can edit them later.

The pattern can be split into other patterns by the Splitter tool.

In the new version (1.445) there is a Live mode - when you edit patterns, the picker automatically rebuilds

4. If you are satisfied with the overall appearance of the picker, close the PB window and manually edit the controls in Picker Viewer (edit mode)

As for color - there are three modes -  individual color (actually maya controls color), pattern color (changes color of all controls in this pattern) and hierarchy weight 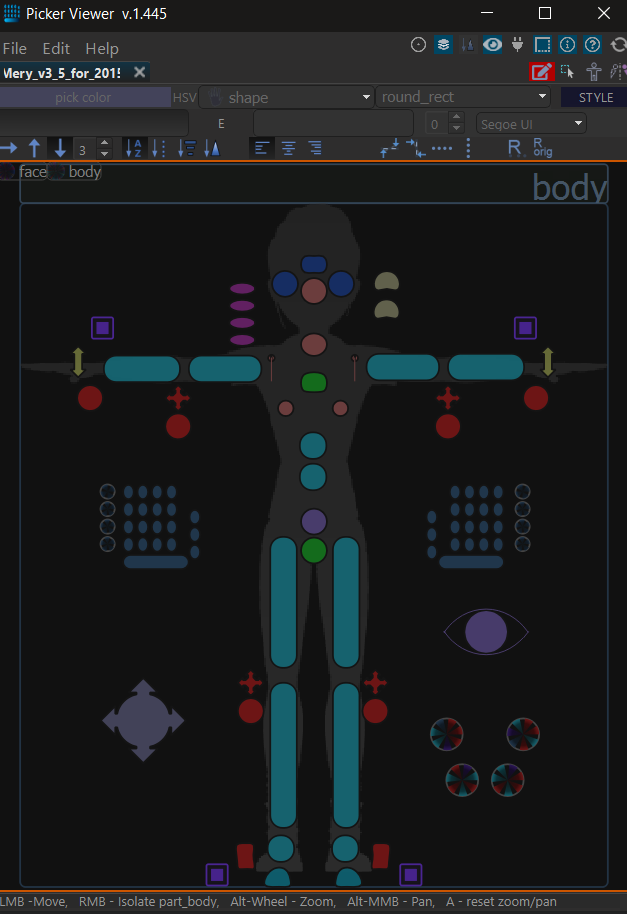 At the end press save. The picker is saved in the folder  “...User_name\[Documents]\maya\scripts\PickerBuilder\assets_pickers”.

To start with, you must load the asset as a reference with namespace.

The namespace itself does not matter. The PB is linked to the filename.

All asset information is saved in “...User_name\[Documents]\maya\scripts\PickerBuilder\assets_pickers”.

You can change this folder in the menu Settings.

Assets should be in default position ( T-pose)  at the beginning of coordinates. 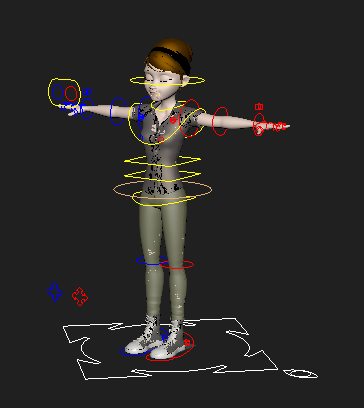 Firstly  PB looks for all visible controls and attributes responsible for switching between forward and inverse kinematics.

If the  PB  does not find these attributes, you can specify them manually.

To do this, select an attribute in the Channel Box

The picker recognizes only  visible controls  or

controls that become visible when the above attributes are switched.

these attributes and load

The PB analyzes the hierarchy of the asset and groups the controls by patterns.

The patterns are grouped in partitions. By default it is Body and Face.

To create your own partition  press

To rename the partition  double click on name in table.

Skin cluster nodes are disabled  during hierarchy scanning by default. To activate it- set

The order of patterns determines the order of adding controls to the picker when building (except main and fingers - it will be added after all).

The patterns are defined by an initial list in the file init_template.json .

Some patterns are defined algorithmically (main, fingers), but you can edit them later.

By default patterns are sorted by hierarchy  weight (sum of all children, subchildren ).

To customize order you need uncheck

button (else it needed when you move patterns between partitions).

Most of the patterns are searched by name mask.

Patterns can be added, removed, and moved between blocks.

You can move patterns in other partitions by drag n drop .

When you delete a pattern, all its controls are moved to the “Rest” pattern.

Some patterns need to be considered separately.

PB searches for them by rule when a control has 3 or more children.

You can change this number here

If this does not work either then try to check “ use Rest” .

For each pattern, you can specify align mode,  type of display ( shape), minimum and maximum size of controls (in pixels) and color.

The color of the pattern is visible when the checkbox

is enabled (in Picker Viewer).

partitions with patterns and load

Patterns can be saved in templates and loaded for similar rigs (like initial_template). Works only for patterns by masks.

The controls in the patterns

All controls that do not belong to other patterns fall into the “Rest” pattern.

- include childs for the above-mentioned operations 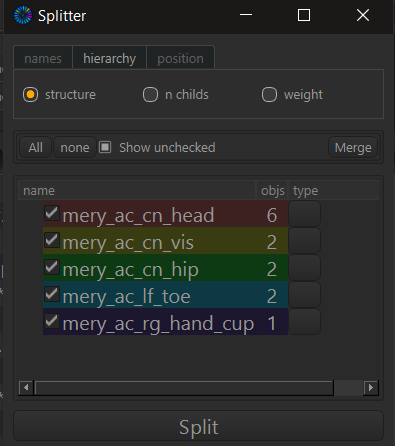 For complex rigs, it is often necessary to break a pattern (especially Rest) into several patterns.

There are 3 ways to split up - by names, hierarchy and position

Also you can merge patterns - select several and click the Merge button.

You can set the character in any position. You can save the pose for convenience and load it next time.

You can also set all controls to the FK or IK position.

After all the adjustments we press

If you are satisfied with the overall picture of the picker,  we can move to Picker Viewer.

If not - make changes and press Build picker again.

There is a Live mode - when you edit patterns, the picker automatically rebuilds